It was 26 years ago that heads of French and German state stood side by side in Strasbourg. Shortly after the fall of the Berlin Wall, François Mitterrand and Helmut Kohl delivered the short speeches of optimism. This week, the German Chancellor Angela Merkel and her French counterpart President François Hollande stood side by side again in front of the Members of the European Parliament (MEPs). In spite of them coming from different spectra of political field, the leaders of these two countries that are considered a “locomotive” of European integration, felt compelled to call on all Europeans to cooperate more. An observer might ask here whether European integrations are really in such serious trouble that they need the push from the side of the funding members. Is the vision of the President of the European Commission, Jean-Claude Juncker, simply not enough to move things into the European direction at the time when each Member State is pulling the strings in its own way? And finally, was the call of Chancellor Merkel and President Hollande in favour of European solidarity overshadowed by their statements in immigration and refugee crisis that the media so happily took up? 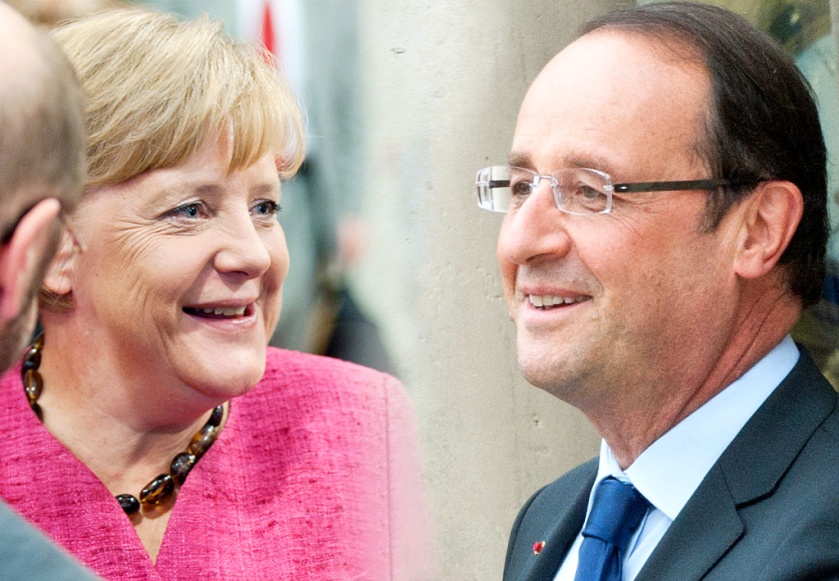 A call for European solidarity. Angela Merkel and François Hollande took an important responsibility upon their shoulders and a symbolic stance. Representing their countries, they called on the other members of the block to cooperate and jointly look for solutions for the eminent challenges that Europe is facing today, namely the refugee crisis. Germany and France have always been a kind of a driving force behind the European integrations. The force that would sometimes slow down and some other times speed up the pace of integration. Somehow, the phrase “Franco-German train” entered into the EU jargon. You are either on this train or off it, you can hang from it or run after it. In any case it is generally accepted that these two countries sit at the front and manage the machinery, the speed and the direction and other countries are either helping, not helping or preventing them to do so. Whether this concept is true or false is a question for political analysts, but what I wish to underline here is the symbolic meaning of this week’s joint speech at the European Parliament in Strasbourg. Chancellor Merkel and President Hollande called the MEPs to strengthen the European unity and cooperation and not to forget the values that bring us all together. At some point the debate then kind of derailed into a more national discourse when the extreme-right French MEP, Marine Le Pen, accused the President of being a “Vice-Chancellor who is running a French province”, to which she received an answer from the President saying that “he is wondering whether Mme Le Pen understands the concept of democracy”. Well. French politics.

There’s talk about refugees but not about their integration. In relation to the current refugee crisis, the French and German leaders called for a quick reaction and management of the crisis. Chancellor Merkel underlined that we are stronger together than divided and that Europe has been founded on human dignity, tolerance, respect of human rights and solidarity. This should also be key traits of a European identity, which need to be safeguarded. Merkel also asked European leaders not to fall victim to populist nationalist debates in light of the refugee crisis, while admitting that the “Dublin rules” have clearly failed Europe as migrants have for their target to move to the wealthier EU Member States and are actively avoiding being registered at their first port of entry into the Schengen area. Even though there was much talk about the refugees that wish to integrate our societies, there was no concrete proposals on how to carry out this integration. There is talk about reallocation, the legal basis, changing of the Dublin system, there’s much stress on humanitarian aspects and tolerance but somehow I cannot find any political discourse talking about how to make sure that the refugees can feel at home in their new countries and thereby start successfully functioning in the societies. This would include learning the language and habits of their host country by taking on the ways of life and contacts with the local population. There are a number of initiatives in Germany dealing with integration of refugees, but they stay at the grassroots level managed by the NGOs, while the political stance on the issue seems not to exist.

And of course there was talk of the finances. Oh how could Merkel and Hollande avoid this topic and neglect the situation that the Eurozone is facing in these months. President Hollande clearly supports a closer integration of the Eurozone and also has a kind of a clear plan how to strengthen its institutions. However, what exactly such institutions would mean for the future of the Eurozone remained unclear. Maybe it does not even matter at this stage. What matters is that France and Germany demonstrated that they agree on continuing on this path which was carved once Germany decided that it can give up its Deutsche Mark, and that the two countries haven’t given up on the common currency.

What now? Angela Merkel and François Hollande made an important political step. This step could have been anticipated by those working in the EU institutions, but it should not be neglected. For them to have met and spoken together in Strasbourg, the arena where elected representatives of European citizens sit, could be a call for the European Parliament to get more engaged in all areas of the Union, including those that do not fall into their competence strictu sensu. It could be that German and French leaders are looking for political support from the European Parliament to convince the other Member States to stop “sulking” and adopt a concrete decision. Or maybe they just decided to put up a political “show” which would attract attention of European citizens and make them think about stepping out of the routine nagging and complaining about refugees and immigration crisis, pause criticising their EU neighbours for where they are different and seek those points that bring us all together. Maybe their intention was a combination of all of the above and more. In any case, it was a nice demonstration of cooperation between these two countries that clearly have not forgotten their role in shaping, developing and leading European cooperation and integrations.

I am a Slovenian EU affairs analyst, proud member of the Charles Darwin promotion at the College of Europe with experience in the European Parliament and the UN Refugee Agency. I am a young mum to a clever and adorable baby girl and I believe that a kinder world can be created through cooperation and understanding. On Twitter as @SpelaMa on Instagram as @spela_ma. Oglejte si vse prispevke od Špela Majcen Marušič

This site uses Akismet to reduce spam. Learn how your comment data is processed.